Author of the photograph: Pepe Marín Zarza Granada expresses in its crafts the assimilation of the trades bequeathed by the different cultures that have settled in it. From...Read more

...the Iberians and Phoenicians or the Greco-Roman world, to the Muslims, indisputable protagonists of the history of this territory of the southern peninsula. Not surprisingly, Granada was the peninsular territory with the longest permanence of Hispanic-Muslim culture, with more than eight centuries of history. The amalgamation of styles and artistic influences, including the Christian imprint, give a personality of its own to works that, due to their quality and beauty, have crossed borders. Productions and trades of particular personality that even today have their continuity among our artisans are: The art of plasterwork , which arises from the use of a raw material, apparently humble as it is the plaster, and its beautification techniques, which acquire their culmination with the Nasrid dynasty . Our artisans manage, as the Nasrid alarifes did, that this raw material becomes an extraordinary plastic expression, making on this material a delicate and meticulous carving that goes from the purest and intricate geometries, to the most voluptuous plant motifs. The color contribution is made with the same traditional technique, with precious minerals such as lapis lazuli, and precious metals such as gold and silver,   The taracea , which takes its Spanish name from the Arabic «tarcia» (inlay). It was introduced to Spain by the Muslims, having its first workshops in Cordoba in the 12th century. Through the Nasrid artisans, this art will pass into the Christian world. continuing its splendor. It is a marquetry and inlay work that combines different woods with metal sheets, mother of pearl, bone, and shell, basically. The result is a detailed aesthetic that uses geometric drawing in its designs and is used in furniture decoration, boxes, chests, bargueños, tables or chess. The pottery of Fajalauza, which is the direct heir to the techniques, models and ornamentation used in the Nasrid period and assimilated by Christian aesthetics in the 16th century to create a sumptuary production of domestic use. Glazed and decorated pieces, in which color and texture play a fundamental role. Its name comes from the medieval gate of the city that gave access to the traditional potters' neighborhood located here after the Christian conquest, where they were made with a white background and metallic blue and green for decorative motifs such as pomegranates, birds and flowers.   The luthierería or construction of the guitars has the main school in Granada, together with that of Madrid. The construction of Granada guitars is entirely manual and requires a perfect command of different activities (carpentry, marquetry and varnishing) in addition to an innate musical talent. These artists work with very selected and mostly imported woods such as German fir or Honduran cedar. Cypress is the national wood used for some components of the flamenco guitar.   The copper and tin shake is another of the ancient trades that still survive. Consistent is the chiselling of the metal to give it those curves that allow you to manufacture the traditional china and utensils for the hospitality industry, and which is so typical of the Albaicín and the Sacromonte .   The wrought iron , which is another of Granada's most traditional tasks, leaving the workshops mainly in the form of bars and lanterns. As for fabrics , Granada was the main silk market since the 13th century. Currently there are some workshops where embroidery with Hispanic-Muslim motifs are still related and looms are still being manufactured.

The production of a guitar maker is between 10 and 12 guitars a year. Usually less than...

The popular pottery in glazed and decorated clay, made in the Albaicín of Granada, with a pottery... 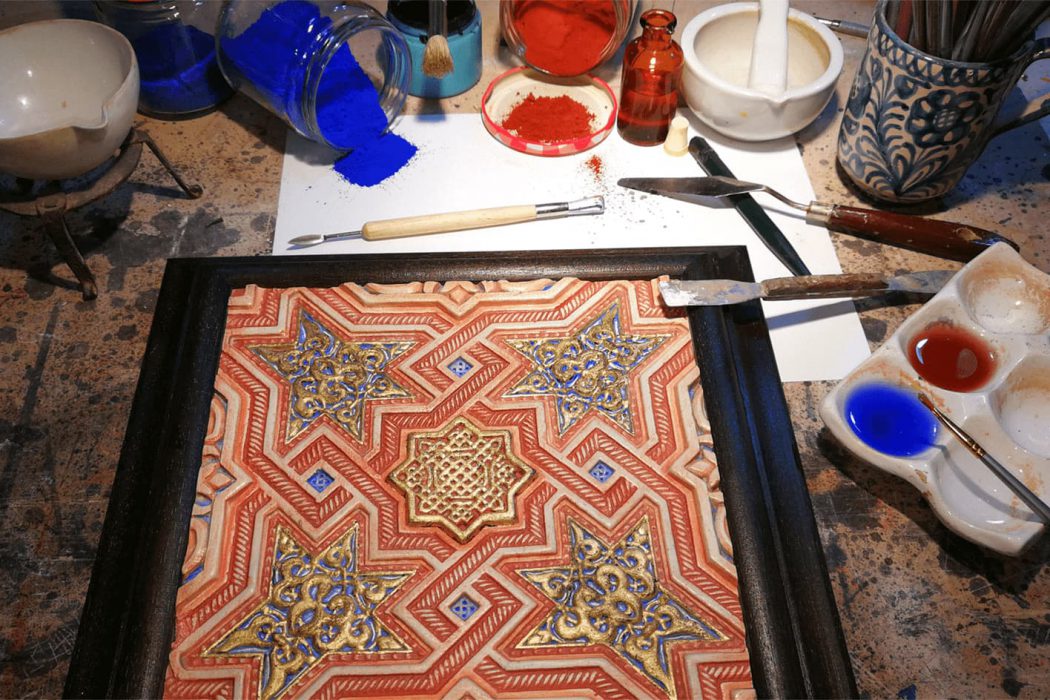 It is an artisan workshop committed to the recovery of the original techniques used by Hispanic Muslim...